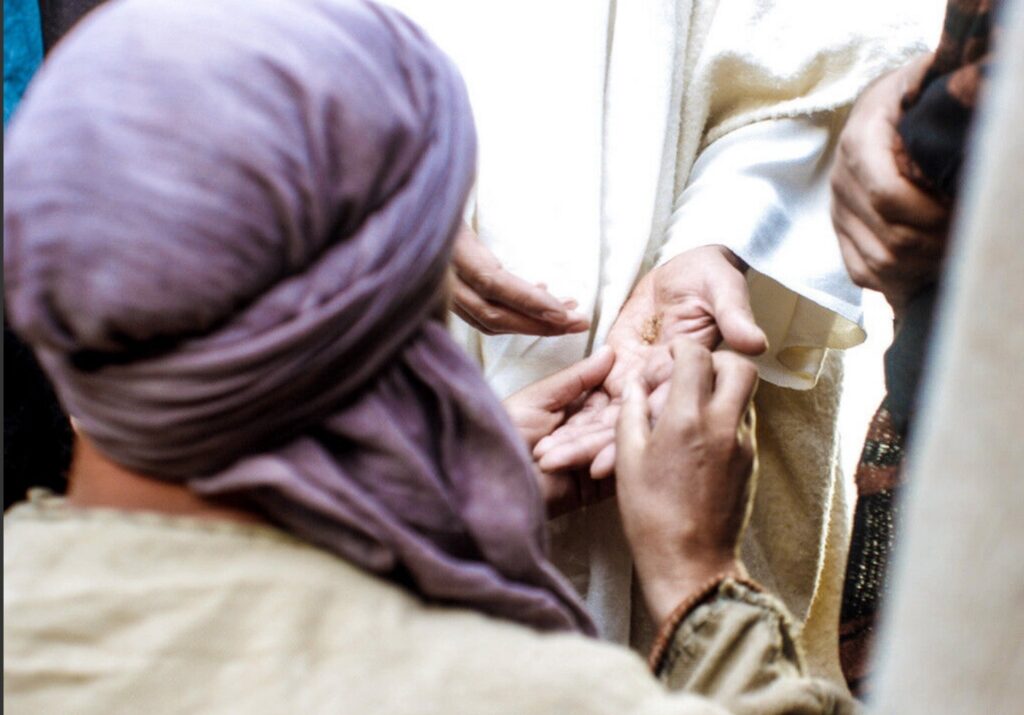 When it was evening on that day, the first day of the week, and the doors of the house where the disciples had met were locked for fear of the authorities, Jesus came and stood among them and said, “Peace be with you.” After he said this, he showed them his hands and his side. Then the disciples rejoiced when they saw the Lord. Jesus said to them again, “Peace be with you. As the Father has sent me, so I send you.” When he had said this, he breathed on them and said to them, “Receive the Holy Spirit. If you forgive the sins of any, they are forgiven them; if you retain the sins of any, they are retained.”

But Thomas (who was called the Twin), one of the twelve, was not with them when Jesus came. So the other disciples told him, “We have seen the Lord.” But he said to them, “Unless I see the mark of the nails in his hands, and put my finger in the mark of the nails and my hand in his side, I will not believe.”

A week later his disciples were again in the house, and Thomas was with them. Although the doors were shut, Jesus came and stood among them and said, “Peace be with you.” Then he said to Thomas, “Put your finger here and see my hands. Reach out your hand and put it in my side. Do not doubt but believe.” Thomas answered him, “My Lord and my God!” Jesus said to him, “Have you believed because you have seen me? Blessed are those who have not seen and yet have come to believe.”

Now Jesus did many other signs in the presence of his disciples, which are not written in this book. But these are written so that you may come to believe that Jesus is the Messiah, the Son of God, and that through believing you may have life in his name.

Three years ago, your life was entirely disrupted.  You are going through your regular days, when you met this man named Joshua Ben Yosef, the Latinized version of this is Jesus.  And there was something about him, a charisma, there was a confidence, there was courage.  These were the qualities that you and your friends eventually recognized as the qualities of Christ.  You left your regular life and followed him for three remarkable years.

During that time, you saw him do amazing things.  You saw him, heal people:  when he entered a gathering and said, Peace be upon you, there was peace.  When he called upon hundreds and hundreds of people – hungry people – generosity was opened, and the people were fed.

You saw him stand up to the religious and political authorities, even under the crushing thumb of Empire, and some of them were transformed.  Joshua Ben Yosef has been the fire against which you have been warming your soul for three years.  He has been the font of wisdom and insight that’s transformed the entire way you see the world.  He has been your friend.

The other people who formed a tight circle around him have become your closest friends in this world.  For you and your friends, Jesus became the container that carried everything sacred, everything hopeful, everything transformative, everything just.

After three years, the powers won.  The Roman authorities, and the religious collaborators in Jerusalem have murdered him.  The container is broken.  All the contents seemingly lost.

Now you’ve done one smart thing in the wake of this trauma, you and your fellows have stayed together.  For the sake of personal safety there may have been an argument for fleeing on your own – easier for one person to escape and hide than a cluster of Galileans hidden out in Jerusalem to avoid being discovered.  You’ve stayed together in your fear, in your rationalizations, in your pain.

And so, you are at an emotional distance from these others who keep talking about what he was like.

What do you say?  You say, until I can put my fingers in the wounds of his hands, where he was tacked to the cross, and until I can put my hand in his side, where he was penetrated by a spear, I will not believe.  And somehow, even in your doubt, your refusal, your pain, you have identified with the very first Christian, Monastic communities taught us:  the wound is the gift.  Suffering is key.  And boy, have you been suffering since Jesus’ death.

So, what are you saying?  You’re essentially saying, until my suffering meets his suffering, I can’t believe.  And then a week later, you go bonkers too.

I’m really glad there were no video cameras back then.  We have to be really careful not to take biblical literature overly literal.  John’s trying to tell a story here about a very powerful thing that happened, and in some way, he’s using symbol.

A week later, you go bonkers too.  Jesus comes through the wall again, shows up and the container that was Jesus that held all that wisdom and spirit and courage and healing power, the room becomes the container.

The circle of Jesus’s friends become the container and everything that was in this one man you journeyed with for three years, is now in all of these people.  Peter, James, John, Mark, Mary, Mary, Salome – Christ is alive in multiple bodies – and they can all touch each other’s wounds.

I want to tell you about something that happened not far from here at a retreat centre in 1988.

There was a gathering of the Canadian theological students’ conference.

Seminary students from United, Presbyterian, Anglican, Roman Catholic,  Lutheran, and various forms of Roman Catholic like Jesuits and training diocesan priests, Mennonites, a few Baptists, and others got together at a retreat centre to spend a week together.  All these Christians.  It wasn’t an easy week.

How many remember what was going on in the United Church of Canada in 1988?

It was the year we fought out for the ordination of gays and lesbians.  It had just happened a couple of months earlier, leaving blood on the floor throughout the whole denomination.  Our fight had infected the Presbyterians and the Anglicans; who, by the way, are still fighting about what we were fighting about in 1988.  I have to say, the Presbyterian Church has elected its first openly gay Moderator.

There are other reasons to fight.  The staffperson from the ecumenical forum who was working with us was Lois Wilson – a great champion of social justice, liberation theology and feminist theology.  You could understand that some of the more conservative seminarians from some of the more conservative traditions; many of them, men who were a foot taller than Lois, were a little bit shaken to the foundations by this woman.

Then, we had a worship service.

I have to say, I was surprised that Jesus showed up in the form of a Presbyterian from Kentucky – never expected it to be Kentucky – he was a grad student at University of Toronto, and we had this worship service for the community.  This man named Walker, if I remember correctly, stood up in the sermon slot and just gave testimony.  He did not identify himself with any of the camps we had fallen into.  He made it clear that he opened his heart, without condition, to everybody present and then he just spoke from a place of vulnerability, shared his own pain – the holes in his hands and his side, and his heart, with one eye looking for hope on the horizon.

Shortly after he shared his testimony, we started to chant the Taize chant Ubi caritas:  “Ubi caritas et amor, ubi caritas, Deus Ibi Est.”  (Translation: where there is charity and love, there God is.)  The hues of light in the room shifted to this gold.  And the emotional field in the room simultaneously grounded and lifted itself towards the sky and opened laterally, and people just started to weep, pouring out the frustration of the previous three or four days of fighting.

We poured out the frustration of finding ourselves as seminarians looking forward to a career in ministry in a time when the church was so screwed up.

We poured out our frustration with the expectations that we would be the generation that would come and revive this thing called the church, when we could see no simple way.  And then we poured out our tears for things deeper, just the sorrows each of us carried.

In the days that followed, whatever room we were in became the container that was the body of Christ.  Over and over again Jesus just came through the wall right to the place where vulnerability met hope.  Where non judgmental listening, across some really big theological and political lines opened people’s hearts, and Jesus came through the wall and was there.

I haven’t kept in touch with too many of the people who were there, but I have with some.  One of them, who was one of the very big male guys who was not on board with a lot of liberationist and feminist theology – still pretty much like that – but the last time I checked in with him 20-25 years ago, he was serving a very conservative community, and was part of the key group of people opening the first AIDS hospice in that community.  He was taking hit after hit but he had the love and the courage to do that.  I don’t think he would have without that moment.

In some ways, friends, we sit like Thomas and Mary and Salome and Peter in that room in a world that is turning away from the body of Christ in the form of the church.  It may be a very good thing in some ways, because it may provide the necessary vulnerability for us to get real with each other, and with the world, about our wounds.  When you’re the dominant cultural institution; which the church was for almost two millennia, it’s very hard to have the church actually be that container like it was in Jerusalem 2000 years ago, or like it was in Aurora 24 years ago.

It may be that the current vulnerability is the exact thing that will facilitate Jesus’ entry into the room.  He’d been hanging around there for the whole 2000 years.  He has just received too few invitations.

To be frank – I like to teach these people behind me – I think he got an invitation when the choir were practicing.  The joy, the energy, the playfulness of the song you’re about to hear, I think, is an invitation to Jesus into a whole new kind of container.  (Song:  Walking in Memphis) 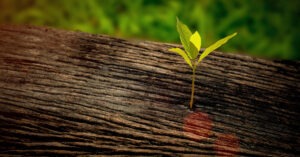 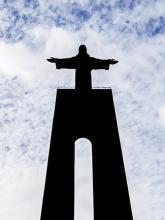 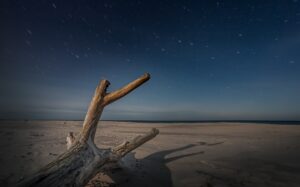